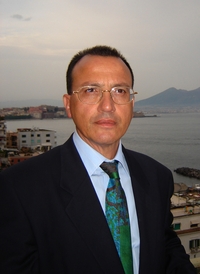 The architect Salvatore Natale born in Caserta, he graduated from the School of Art of San Leucio (Caserta) in 1972, graduated in Architecture at the “University Federico 2nd” of Naples in 1981, where in the same year he passes the exam of qualify to the profession.
Began his official freelancer in 1983, he has assets of over thirty years experience very extensive and intense, both in the field of architectural design, that the design, with works published in books and magazines.
Its business is multifaceted and spans different sectors, from architecture, with works both in Campania and in other regions (Tuscany, Emilia Romagna).
Also it plays the activity of Art Painting with investments in national and international collective and solo exhibitions since 1969, with several awards, including the 1st Prize Rotaract Club Caserta (1982).
He also participated in a series of National and International shows including: