The speech addressed in this work is developed starting from the center of the picture, by gear metal that gives movement to the whole figure, to express the concept of Being robotic, technologized, dehumanized; the work represents the exasperation of the contemporary civility, it looks to the man who lives his daily experience in the dynamic of the assembly lines; a daily exasperated, repetitive and alienating, marked by the same movements, the same gestures, the same actions.
However, the work, beyond exaltation of the movement of the machine, the action - which connotes the poetics of Marinetti's Futurism - highlights what remains of it, the surrogate, the downside, the other side of the coin.
The figure breaks from the perspective space of the background, trying to escape from the context in which "he see" forced to live; he is on its knees because the system tries to subjugate the human being, to enslave him to own power, to own system, to fold himself everyone and everything; but at the same time, the figure assumes a proud attitude, imposing, represents the one who, despite everything, no strikes, does not succumb, tries to escape this iron grip, fight to avoid being overwhelmed, he poses in a state of challenge to society and the system, try to move forward and get ahead in life.
How, in what way?
In the upper torso is depicted, not by chance, a spiral, symbol of "Imagination to Power" movement philosophical, cultural and social that had great resonance in the sixties years, led by the poetry of Marcuse, Jerry, etc., preaching the fight against all forms of oppression.
Walter Benjamin said: "It is only by merit of the desperate, the marginalized [of those who still have not been enslaved by the system] that they are given a hope".
Well, the gesture of the subject mechanized that dominates the painting is of refusal against the society that - as said - trying to subdue, to enslave their own power, to their own system.
The reason and the language does’nt have the strength to resist this model of organized society. Here, then, that "imagination to power" becomes the only instrument capable of seeing things in the view of potentiality, creating alternatives. "Power to the imagination" is also here, evoked and intended primarily as fantasy, creativity, as the last anchor of salvation for the Human Being, able to get him out by the flattening total of the life and its fundamental values.
Fantasy, creativity can be traced for us, a parallel life and alternative, more rich in values and contents, as opposed to the consumistic civilization, propagated by the mass-media, which, continuously, bombard and propinare us only garbage.
The figure at the center of opera to "get off" by dint shouldering, to escape from this vise - symbolically synthesized by the skyscrapers of Manhattan just because, in the last decades of the past century, the USA have represented the maximum development of technologization, its problematic and exasperation connected - tries to open up a road in his life, that road to the center of the painting gets lost in the background where, not coincidentally, is depicted a sunset.
All as in an equation : sunset = crepuscle, crepuscle = crepuscularism, decadentist movement that reaffirms, almost to be a "manifest", the disintegration of the Being and destruction of the foundations true, the loss of all values, moral, social and cultural of contemporary civility.
Salvo Nugnes Promoter Art and Salvatore Natale at "Milan Biennale - International Art Meeting" Sept 2015
The art critic Elena Gollini and Salvatore Natale at "Milan Biennale - International Art Meeting" Sept 2015
Work on show at the "Milan Biennale - International Art Meeting" Sept 2015
Publication of Mondadori Book about "Milan Biennale - International Art Meeting" Sept 2015
Publication of Mondadori Book about "Milan Biennale - International Art Meeting" Sept 2015 - Pages dedicated to the artist Salvatore Natale
Art Criticism about the work of Salvatore Natale at "Milan Biennale - International Art Meeting" Sept 2015
Article on newspaper "Il Mattino" about "International Art Meeting - Milan Biennale" Sept 2015
Article on newspaper Il Mattino about "International Art Meeting Milan Biennale" 2015 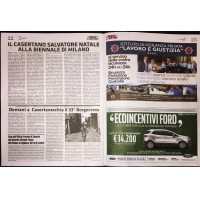